About Excel
REPUBLIC OF INDIA

India, officially the Republic of India, is a Country in South Asia. It is the seventh-largest country by geographical area, the second-most populous country, and the most populous democracy in the world. Bounded by the Indian Ocean on the South, the Arabian Sea on the West, and the Bay of Bengal on the East, India has a coastline of 7, 517 kilometers (4,700 miles). It is bordered by Pakistan to the West; China, Nepal and Bhutan to the North; and Bangladesh and Myanmar to the East. India is in the vicinity of Sri Lanka, and the Maldives in the Indian Ocean.

Home to the Indus valley civilization and a region of historic trade routes and vast empires, the Indian subcontinent was identified with its commercial and cultural wealth for much of its long history. Four major religions, Hinduism, Buddhism, Jainism and Sikhism originated here, while Zoroastrianism, Judaism, Christianity and Islam arrived in the first millennium CE and shaped the region’s diverse culture.

Gradually annexed by the British East India Company from the early eighteenth century and colonized by the United Kingdom from the mid- nineteenth century, India became an Independent Nation in 1947 after a struggle for independence that was marked by widespread non-violent resistance.

India is a republic consisting of 28states and seven union Territories with a parliamentary system of democracy. It has the world’s eleventh largest economy at the market exchange rates and the fourth largest in purchasing power. Economic reforms since 1991 have transformed it into one of the fastest growing economies in the World; however, it still suffers from poverty, illiteracy, disease, and malnutrition. A pluralistic, multilingual, and multiethnic society, India is also home to a diversity of wildlife in a variety of protected habitats.
Education in India 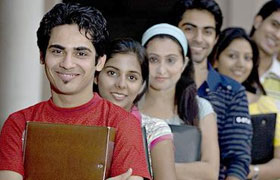 Education in India has a history stretching back to the ancient urban centres of learning at Taxila and Nalanda. Western education ingrained into Indian society with the establishment of the British Raj. Education in India falls under the control of both Union Government and the States, with some responsibilities lying with the Union and the States having autonomy for others. The various articles of the Indian Constitution provide Education as a fundamental right. Most Universities in India are Union or State Government controlled.

India has made a huge progress in terms of increasing primary education attendance rate and expanding literacy to approximately two thirds of the population. India’s improved education system is often cited as one of the main contributors to the economic rise of India. Much of the progress in education has been credited to various private institutions. The private education market in India is estimated to be worth $40 billion in 2008 and will increase to $68 billion by 2013. However, India continues to face challenges. Despite growing investment in education, 40% of the population is illiterate and only 15% of the students reach high school.

As of 2008, India’s post-secondary high schools offer only enough seats for 7% of India’ s college-age population, 25% of teaching positions nationwide are lying vacant, and 57% of college professors lack either a master’s or PhD degree. As of 2007[update], there are 1522 degree-granting engineering colleges in India with an annual student intake of 582,000 plus 1,244 polytechnics with an intake of 265,000. However, these institutions face shortage of faculty and concern have been raised over the quality of education.